"You’ve got to stop thinking and start living before the system in your head has a chance to stop you.” Mel Robbins

Do you ever get that weird feeling? A nudge, an intuition, a great (and maybe crazy) idea. It’s an urge to do or say something… and before you’re able to really dive into it, you have already talked yourself out of it.

That time window, in which you decide to take or not to take action towards what may be your most important thing to do, is around five seconds long. And exactly this tiny, but critical time span is what Mel Robbins’ book “The 5 Second Rule” is all about.

There are Two Kinds of People

According to Mel and her findings in research publications about brain and behavior science, there are two kinds of people: Those who perceive themselves as in control of their lives and those who feel like life’s just happening to them. People who have this internal sense of control are happier, healthier and more productive. Those who consider themselves a victim of life instead are very dependent on outside circumstances and thus more prone to being stressed, unhappy and unable to do anything about it.

How do we change this “Locus of Control” (locus = place) from external to internal?

The Bias Towards Action

What we need is a bias towards action instead of a bias towards thinking. This is where the 5 Second Rule comes in very handy. It teaches us how to take action and over time, says Mel, you become the kind of person that operates from a bias toward taking action. “When you take action over and over and over on your instincts, on your desires, on your commitments, guess what you get? You build an internal locus of control, you become the kind of person that believes you’re in control of your life because you’re proving it to yourself one five second decision at a time.”

So What Exactly Is the 5 Second Rule?

Counting 5-4-3-2-1 wakes your prefrontal cortex up and you start the process of changing by pushing yourself into a new direction. “That first push, that’s going to be the hardest. Once you get moving, it gets so much easier”, Mel says.

This is how it’s done: “The moment you have an instinct to act on a goal you must (count) 5-4-3-2-1 and physically move or your brain will stop you.”

Or, in other words, and from a different perspective: The moment you realize you hesitate (despite knowing that you should do something) do your backward countdown 5-4-3-2-1, move your body, and take action.

The trick is to be okay with not feeling ready or motivated for change and pushing yourself forward anyway. When you see yourself taking action you can watch yourself becoming the person you desire to be. By consistently applying the 5 Second Rule you rewire your brain to a new you while building confidence and courage.

In her interview with Lewis Howes on the “School of Greatness” podcasts, Mel speaks about habits, especially thinking patterns and how we can interrupt and change them. She says research found, about half of our days we function on autopilot, a habitual basis. “When you’re checked out and on auto-pilot, any behavior pattern that you repeat, can take over. And guess what are our behavior patterns that we repeat: thinking patterns. So self-doubt, worry, procrastination, overthinking, analysis-paralysis, fear – those are all thinking patterns that are habits.”

Mel clearly points out that we aren’t worriers or procrastinators (etc.), but we do have a habit of worrying or procrastinating. And every behavior pattern can be interrupted and replaced.

The question is: When we have that idea, intuition or clearness about what needs to be done – are we acting on it or are we allowing ourselves to fall back into our habits? The moment our brain realizes that we’re hesitating it will do anything to talk us out of the possibility of change. That’s why it is important to act fast, within 5 seconds.

How Discovering the 5 Second Rule Helped Mel To – Over Time – Completely Change Her Life.

It’s interesting to read or hear (the audiobook of the 5 Second Rule is read exceptionally captivating by Mel) how Mel discovered the 5 Second Rule. In her life she had arrived at a very low point – she was unemployed, her marriage seemed like a big mess and she perceived herself as very insufficient as a mother. Nothing seemed to work, she couldn’t even get out of bed in time to get her kids ready for school. Then, one day, she saw a rocket launch with the usual countdown 5-4-3-2-1 on TV and suddenly thought that maybe she could launch herself out of bed like this, counting down, the next morning. It worked. Again and again. And step by step, bit by bit she discovered that her new invention worked on about everything and anything she would use it for: Stopping bad habits, speaking up, interrupting thinking patterns and much more.

Her life over time completely changed. One five-second decision at a time. Today Mel is an internationally sought-after speaker, best-selling author and surely a person that stands in her power and loves her life. Her TED Talk “How to stop screwing yourself over” (https://www.youtube.com/watch?v=Lp7E973zozc) has been watched over nine million times.

Are you Interested in knowing more about Mel Robbins? 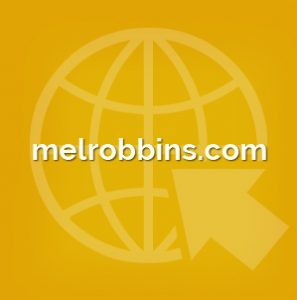 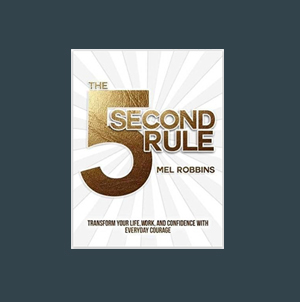 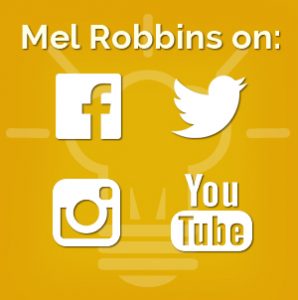